Scisys Media Solutions has been discussing the details of its recently announced deal with France Télévisions at IBC2019.

Under the terms of the deal France Télévisions will deploy Scisys’ Open Media in an organisation-wide replacement of its newsroom systems. Encompassing key Paris studio locations as well as regional and overseas operations, the roll-out is expected to be substantially complete by late 2020. 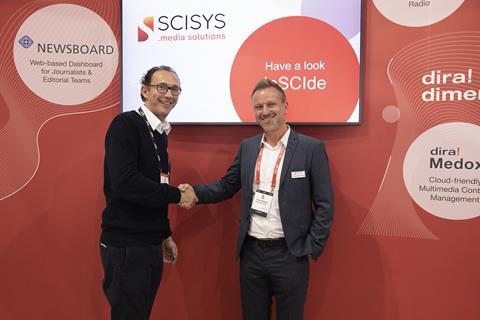 Speaking to The IBC Daily, Aurélien Davoust, head of south business unit, Scisys, remarked that the overhaul with pave the way to “much greater sharing of content. There will also be total transparency in terms of who is working on which story, and what stage they have reached [in terms of the production of each item].”

The sale to France Télévisions further underlines the popularity of OpenMedia in the French market, with Radio France among its other high-profile customers.

Trevor Spielmann, head of sales – newsroom solutions at Scicys, said: “With deals [such as the France Télévisions one] I can report that 2019 has been a very strong year for us.”

Looking ahead, Davoust echoes the sentiments of many IBC 2019 delegates in that “AI is going to be a big part of production”, including in helping reporters manage the increasing volumes of information they need to process. Meanwhile, in 2020, he expects Scisys to focus on developments such as “web-based capabilities for the newsroom system. [It’s all part of] reflecting the way people are wanting to work now.”

Scisys Media Solutions is exhibiting at IBC2019 on Stand 3.B38.