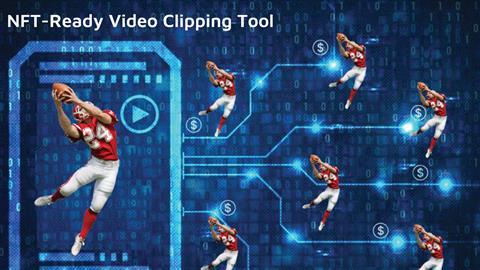 NFTs in media: technology on trajectory “from the experimental to the mainstream”

While sport has (so far) accounted for the lion’s share of media-related headlines, NFTs also have the potential to transform relationships between creators and audiences across the music, film and TV worlds, writes David Davies.

With any significant technological shift, there are – at the least – always bound to be a few ‘bumps in the road’ from a public perception viewpoint. Non-fungible tokens (NFTs) are no exception, and in recent months there has been a flurry of articles that question the long-term viability of this market – not least in the pages of the Wall Street Journal (‘NFT sales are flatlining’, May 2022.) 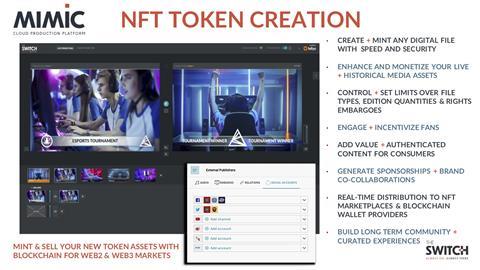 The switch - MIMiC Platform for NFTs

However, look beyond the undoubted current volatility of the crypto market and into the use of NFT and blockchain in broadcast and media, and a far more positive narrative emerges. The 2021-2022 period has witnessed a wave of groundbreaking media NFT projects – not least from sports federations and leagues such as the NBA and WWE.

Indeed, the extent to which sports has been driving NFT growth was recently underlined by a prediction from Deloitte that NFTs for sports media will generate more than US$2bn in transactions in 2022.

But with recent months bringing major NFT-related announcements from film/TV and music companies and individual creators, it’s fast becoming a phenomenon that is impacting all areas of the creative industries. Michelle Munson, co-founder and CEO of content blockchain innovator Eluvio, is in no doubt that the last 12 months have marked the next phase of NFT maturity, not least as a core component of the “next 20-year inflection point of the internet.” 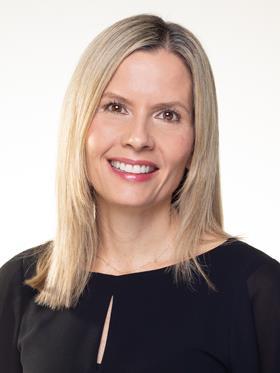 “During the last year we have seen NFTs transform from something experimental to becoming mainstream,” Munson says. “All over the industry you see more and more organisations looking to create Web 3.0 native experiences, typically involving tokens – mostly non-fungible, but some fungible as well. And from our perspective, [the focus is on] pushing the envelope in terms of directly engaging regular people” – thereby extending NFT’s scope beyond its initial emphasis on collectibles.

Still, whilst the past year has witnessed a surge of activity in numerous areas of the media, there is no doubt that sports has been the most enthusiastic adopter to date. The US, in particular, has seen a host of innovative schemes by the likes of World Wrestling Entertainment (WWE) and the National Basketball Association (NBA), whose Top Shot marketplace allows users to buy, sell and collect NBA NFTs that highlight significant ‘moments’ minted on the FLOW blockchain. 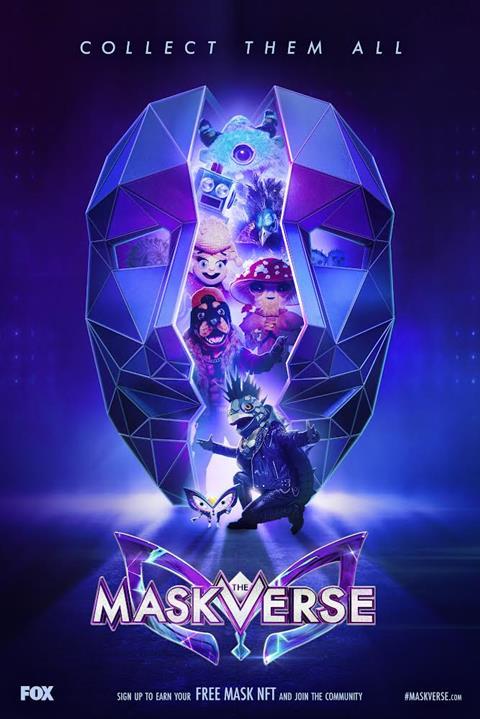 Speak to vendors and media services companies either actively involved in, or exploring the potential of, NFT-related projects, and it’s clear that most anticipate the continued development of sports media NFTs that collate swathes of audio and video material around memorable ‘moments’ occurring in individual events. To this end, it’s probable that a marked change in production workflows is on the horizon.

Debra Slater, director of Three Media Associates, observes the present momentum behind “looking at what value can be added via some form of blockchain to the production side so you can capture everything related to a [specific moment]. From our perspective, we want to see what can be done across the supply chain when it comes to adding value, which could be in terms of quality and availability of data as a key consideration rather than pure efficiency.”

Three Media’s CTO, Craig Bury, indicates that NFTs with “smart contract overlays” that define the specific rights of the owners will help the technology to grow in sports and beyond.

“If you need the validation of the provenance of a piece of material, NFT is a pretty good way to do it because of the immutable characteristics of the blockchain and the ledger associated with it,” Bury says. Although he indicates that the market is still in a fairly formative stage, he is encouraged by the “huge amount of experimentation” taking place and says “we can be fairly certain that more uses and applications will inevitably come down the pipe”. 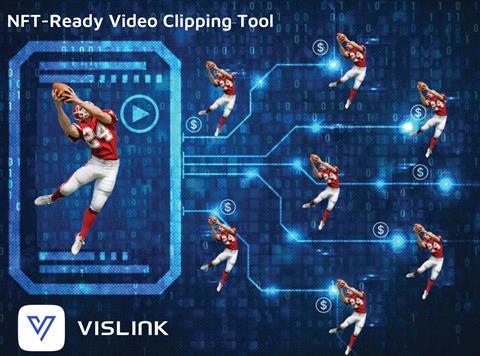 Vislink is one company that has undoubtedly moved a stage beyond experimentation, having showcased its new NFT-related innovation at the 2022 NACDA (National Association of Collegiate Directors of Athletics) Convention in Las Vegas last month. Designed for use by a broad spectrum of organisations, the NFT-Ready Video Clipping Tool will allow users to capture, package and convert video clips into NFTs that organisations can “use as a revenue source while increasing engagement with their fans.”

Mickey Miller, CEO of Vislink, remarks that the NFT trend is resonating with “humans seeming to value ownership of things that are recognised by other humans. My personal view is that NFTs need to have utility [in the long-term]. But I think that we are now seeing that in some of the projects that are emerging.”

NFTs can create something beyond sentiment

As it turns out, the potential of NFTs to nurture more profound relationships with audiences has also been on the mind of global media technology solutions provider MediaKind. 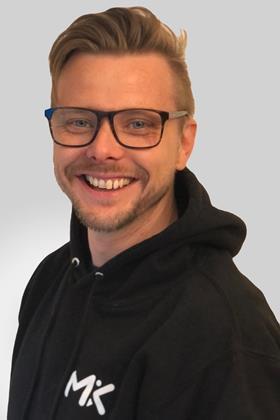 Chris Wilson is the company’s director of market developments, sports, and comments: “Whatever the piece of video it can have sentiment attached to it – such as audience or social media reaction. But there is also an opportunity to create something beyond sentiment; you can do all kinds of cool things such as [connecting NFTs] to memorabilia or exclusive event access.

“So, I think you are now going to see a lot of activity around using NFTs and other digital collectibles as a means to engage audiences and build fan communities that go beyond the live broadcast.”

Recent developments suggest that this could be a future focus for MediaKind, which last year introduced a new end-to-end direct-to-consumer solution, MediaKind Engage, for video contribution, production, streaming and audience engagement.

“Companies need to think about how they can really use [blockchain and NFT] technologies to deepen their customer engagement and drive revenue.” - Meredith Wolcott, The Switch

Wilson is clear that it is in the “pairing of smart contracts and digital tokens where the value” is most apparent, but indicates that it will be a while yet before the industry settles on some preferred approaches: “I don’t think anyone has any set ideas about all this, but I am sure that will happen.” Moreover, as with any significant new area of technology, people need to gain “familiarity, understanding and trust, and that comes with time.”

Meredith Wolcott is sales director at The Switch, the company behind a global transmission network that connects more than 800 of the world’s largest content producers, distributors, and sports and event venues. Like Wilson, she indicates that the potential use cases of NFTs will only continue to grow. 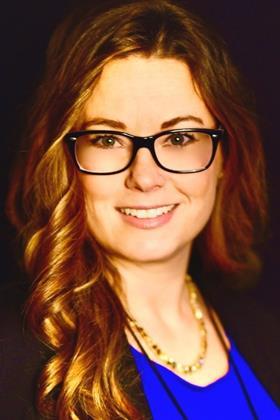 “I honestly think the possibilities are endless,” she says. Hence, in addition to leagues and federations exploring NFTs, there is a chance for individuals including “US college athletes to monetise their name, image and likeness, and gain revenue from that. A few years ago they would have to go pro to make some money, so that alone [represents a big change].”

Historically, broadcast sports rights have been the subject of complex agreements driven by the relationship between the sports organisation – be it club or federation – and the broadcaster. But this dynamic is changing, not least because the advent of streaming and more affordable production technology makes it easier for the sports organisation to go direct to viewers – if not for the main event, then for an ever-increasing array of auxiliary content.

With NFTs factored into future deals, it’s no stretch to see how individual sports people might also utilise specific content to help build their brands.

The Switch is working with “rights holders, leagues and teams to see how they can take content [into these new forms], and have the tools to amplify and enhance different workflows.” But although the tools are increasingly available to utilise NFTs, a long-term view is essential.

“I think that in five years it will be more mainstream,” says Wolcott. “But [it does take time] to educate the public and for people to see the value of it. Companies also need to think about how they can really use the technologies to deepen their customer engagement and drive revenue.” Because ultimately, in terms of the NFT customer, it will “not be about showing wealth, but what you are passionate about.”

The theme of utilising NFTs to explore new kinds of engagement – spanning interactivity, gamification and re-monetisation of back catalogue content, as well as ‘on the fly’ creation of new NFTs from live events – is also picked up on by Michelle Munson from Eluvio.

One of the undoubted pioneers of media blockchain and NFTs, Eluvio has revealed details of multiple groundbreaking projects during the last 18 months with organisations ranging from Fox Entertainment, MGM and Virgin Music, to individual creatives including Dolly Parton. The Eluvio Content Fabric technology’s ability to undertake all content distribution and sales processes on the blockchain endearing it to a wide range of customers. 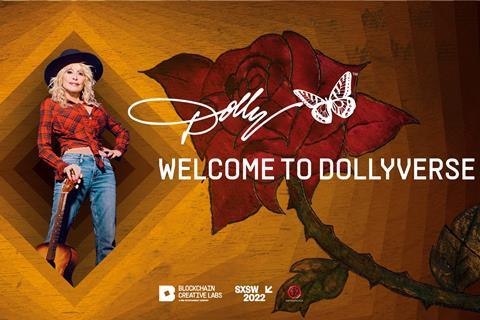 Munson expects the pace at which NFTs are now maturing to be reflected at IBC 2022 and beyond. “I think you will definitely see that more and more media is getting created for this type of distribution,” she says.

Highlighting the abundance of creatives and companies looking at these technologies to “deliver transformative value”, Munson anticipates that the next big step for the industry will be “actually releasing video and film content in episodic form, as well as music, directly onto the chain.” And whereas some early blockchain-based projects may have had a more niche appeal, there is now “going to be more targeting of the mainstream user.”

Intriguingly, Munson suggests that fluctuations in the crypto world could actually have benefited the outlook for NFTs in media. “One good thing about the crypto downturn is that the interest in pushing the boundaries of the technology to create new forms of entertainment, such as Web 3.0 experiences, has really gone up,” she says. 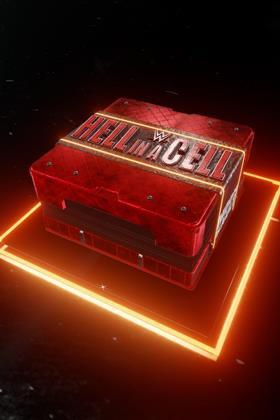 Eluvio’s ’Hell in a Cell’

In particular, it is apparent she believes that NFT and blockchain herald a chance for the historic imbalance between musicians and music companies – a problem that has arguably worsened dramatically in the current era of streaming – to be addressed at long last. With Web 2.0 streaming, “so much value has gone to the platforms as opposed to the end-points – ie. the creators and the audience. This is the opportunity to really change that.” Increasingly, “people are realising that Web 3.0 is here to stay and that it will provide experiences that can bring media out in a new way. One result of this will be that the next wave [of projects] will be driven by the media experience on chain with collectibles as an adjunct.”

So all in all it’s still early days, but the excitement around the creative and commercial possibilities is palpable. Last word to Chris Wilson: “We are at the beginning of a very long journey, and it’s going to be absolutely fascinating to see how it plays out.”

For more on how NFTs are being used by media companies and what the future could hold, read our overview of blockchain in broadcast