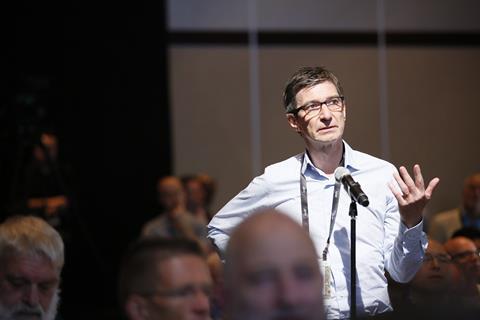 Harrison: “There are still many distinctive things about the media industry.”

The Digital Production Partnership (DPP) had a three-pronged strategy for IBC fronted by IMF implementation.

During the event, it offered a show floor tour, plus an IMF briefing breakfast on the Friday of IBC featuring the support of IMF from Adstream, ITV, and Disney.

“Our second big theme is a sub-set of IMF, or maybe the overarching theme for IMF, which is localisation,” said DPP MD Mark Harrison.

A report will follow on globalisation and localisation. The third strand of the DPP’s IBC was the next-generation supply chain and how it is being taken into the cloud.

“Strongly related to this is the continuing gulf between the technical and business realms within big organisations, typified by the differing perspectives of the typical CFO and CTO,” said Harrison.

“The CFO will typically be looking for the CTO to deliver cost savings, and is constantly in fear the CTO will turn up with a business case that requires investment,” he added.

“The CTO meanwhile will be looking to modernise the digital processes. Probably far less common is the conversation between the two of them about how they can drive revenue for the benefit of the business.”

Harrison explained what influence new members have had on the DPP.

“Our typical new member company is one that is internet native, whether they are a content provider or services provider, and typically their HQ is outside the UK,” said Harrison.

“They bring a global perspective that really does change the nature of the conversation. Very often their concerns are about how to scale their video operations in a market which might be new to them, and in which they are trying to achieve differentiation.”

“Even new content providers that have grown up supplying video to online very successfully don’t necessarily know what it means to move from having done that very well over a period of three years, to actually designing a business that will continue to do that for decades,” he added.

The big fascination is to what extent the media industry is now being industrialised.

“This is a concept which the creative industry has instinctively resisted for decades, but if we are being industrialised then many processes will be common to other industries. It means we might not be as special as we think we are,” said Harrison.

“We need to be more open to what we can learn from other industries. But on the other hand, just as the car industry has plenty of characteristics that are very distinctive, so does the media industry. For all the change, plenty of peculiarities are likely to endure,” he added.

Fact file
The subject of digital advertising and its further development is a vital subject, claimed Mark Harrison.

”It is something that is too little discussed at the moment by our industry,” he said. “Everybody talks about the fact that there is more content than ever before, which is true, but what they do not say as often is that plenty of it is not making any money!

“What we don’t actually know is whether in the future all that content will make money and if the volume of growth can continue to be funded.”

Harrison said the evolution of commercials is a hugely important topic, and using technology to improve personalisation is key to becoming more effective. “But that is not enough in itself to ensure that you are going to have a business.”

Harrison explained that the pace of change is problematic when it comes to implementing and adopting technology and standards.

“We never get the chance for any particular technology, or the best practice, or common standard to bed down before it is disrupted, and we move onto something else,” he said. “You can end up with a huge number of parallel, overlapping and unfinished conversations about many of our core activities. That is a huge challenge…I am certain that we are going to continue to need standards in certain areas but they will become more select. There will be fewer standards overall.

“We need to find a way of gaining a more rapid understanding of recommended practice, and a common understanding of business benefits.  It often feels in our business as if - despite the fact we have been doing it for a long time - we are making our first ever piece of content.”