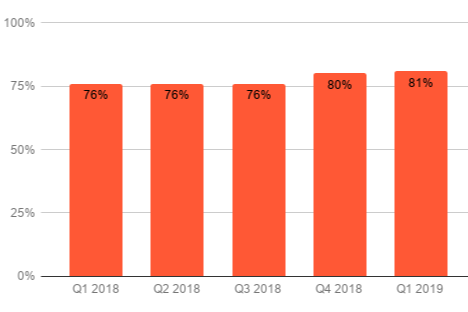 Connected TV now accounts for nearly half of all video advertising impressions served, according to the latest Video Benchmark Report from Extreme Reach.

First quarter metrics from the firm’s AdBridge platform found that connected TV advertising impressions are at 49% of total impressions – nearly double those of mobile. Overall, the number of video ad impressions grew by 60% year-on-year.

The impact of these ads is boosted by the fact that many don’t include a “skip” option, meaning they have a 97% completion rate on connected TVs – that’s compared with 81% for mobile.

Q1 2019 mobile video ads made up 25% of all impressions, according to the report – the lowest since Q1 2017. Desktop ads continued to decline, making up just 17% of the share, while tablets saw a slight resurgence at 7%, up from 6% in the previous quarter, but down from 11% year-on-year.

According to a Nielsen report from March, 68% of all US households have a connected TV device, be it a connected TV itself or a set-top box. At the same time, ad-supported streaming services like Hulu are seeing significant growth.

One notable outcome of the growth of connected TV is a shift to longer ad lengths. In Q4 2018, 30-second ads displaced 15 -second ad spots as the most common length and this trend has continued, according to the report. 30-second ads accounted for 69% of all ads in Q1, a 20% increase on the previous quarter.

15-second ads continued to hold up second place, Extreme Reach said, though the 60-second ads category is seeing significant growth. The number of 60-second ads grew almost five-fold year-on-year, although it still makes up just 3% of all adverts.

Connected TV inventory is almost exclusively sold by premium publishers directly to agencies and advertisers and this has driven up the percentage of overall impressions served to premium publishers, Extreme Reach said.

In Q1, 82% of video impressions served by Extreme Reach ran on premium publisher sites and the video completion rates for those publishers hit a record high of 93%, a year over year increase of 8% from Q1 2018.

There was one bit of bad news in the report, however, and that was regarding average click through rates, which fell from 0.26% in Q1 2018 to 0.16% this year – a 37% decline. Click through rates for premium publishers did grow slightly, however.

“The digital advertising ecosystem is undergoing a total disruption which is driven by the growth of non-linear TV formats. The upside is significant for nearly everyone,” stated Mary Vestewig, senior director, video account management at Extreme Reach.

“Publishers are able to maximize the value of their inventory which will bring the revenue needed to create more high-quality programming. Meanwhile, audiences have an unprecedented selection of entertainment options and with new capabilities for targeting they should get more personalized and relevant advertising.”