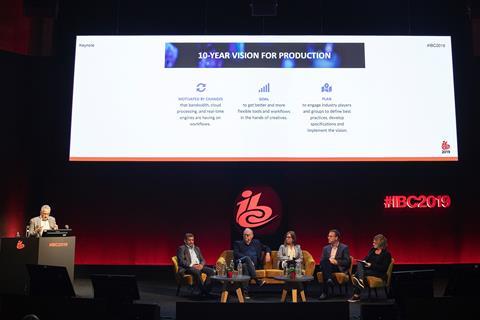 At the IBC Conference session, ‘Hollywood’s vision for the future of production in 2030’, session, tech bosses from the big studios gathered to discuss MovieLabs’ whitepaper aimed at rethinking production workflows.

MovieLabs - set up by Paramount Pictures, Sony Pictures Entertainment, Universal Pictures, Walt Disney Pictures and Television and Warner Bros. Entertainment - says that for its ten-year production blueprint to happen, assets need to be created and ingested straight into the cloud. Any tools used on content assets in this new workflow must come to the cloud, rather than the other way around.

Arjun Ramamurthy SVP of technology, Disney, stressed that the major Hollywood studios now needed “everyone in production ecosystem” to work with them on this journey.

He added: “To put my standards hat on for a second, we want the best of breed tools, but they need to be interchangeable and interoperable – I would say that this is the key message here for manufacturers at IBC.”

“We need the entire industry to come together on this. We have our own goals, but we know that others will need the same tools.”

The Sony tech head added that the studio did not want to build its own tools to manage cloud solutions but would require “the ability to plug into our own preferred vendors.”

In terms of formal standard creation MovieLabs is currently harnessing that effort, collecting data on what needs to be formally agreed.

Besides standards, the other big concern raised was security. Wise admitted that what keeps him up at night is “a $1bn file sitting on a server a few days before its release date”. He said that he wanted to see encryption wraps in cloud-based workflows “everywhere”.

But while security might have prevented Hollywood from engaging with the cloud earlier, studios said they felt more comfortable now cloud vendors are more mature.

Baggelaar added that a common ID system would be critical to identify the thousands of workers interacting with studios’ content.

Daphne Dentz, senior vice president, mastering & production technology, Warner Bros. added that an ID system would also formalise protocols for crew members who wish to use their own devices or plug their own kit into studios’ production networks.