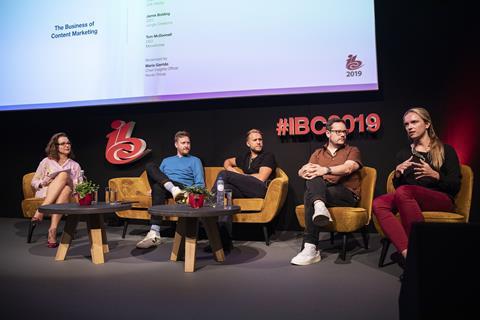 Content Marketing: “Content that provides something of value to a user in exchange for some kind of indirect commercial business value”

A supermarket retailer who released its own take on the BLT sandwich ahead of London’s Gay Pride weekend (the LGBLT) was used as an example of how not to market content to consumers during Sunday Morning’s Business of Marketing Content session.

Speaker Tom McDonnell, chief executive of audience interaction platform Monterosa added: “It was a nice sandwich, but it couldn’t have been more insulting – how is a sandwich in any way contributing to equality?”

Authenticity, agreed Joe Media executive creative director James Wilking, plays a crucial part of the content marketing experience, and he added that brands should pair up with appropriate partnerships rather than just cynically exploiting causes to promote goods.

“I know of one fashion brand who insinuated that the riots in the Arab Spring were caused by their midsummer sale! You should only tap into calendar moments if it’s right for the brand.”

However, content marketing – which McDonnell defined as “content that provides something of value to a user in exchange for some kind of indirect commercial business value” is one of the few growth areas in the sluggish advertising market.

The panel agreed that such marketing includes social media campaigns, sponsored articles or experiential marketing stunts. The content usually exists online or has something which has ‘shareable’ online value.

Session’s chair Havas’s Maria Garrido pointed out that consumers increased appetite for this form of advertising was, in part, because over 420m people now have ad blockers on their phones, forcing brands to look towards less traditional forms of advertising.

Although Garrido quoted research that indicated that 90% of consumers want content from their brands, the panel stressed the importance of approaching it in the right way and not expecting too much from users on social media channels.

“We’re dubious of UGC if the audience is not already doing it,” Wilking added.

“A couple of years ago we ran a World Cup campaign for a brand which would have granted the winner access to all the games in the tournament. But it required users to upload clips of their favourite goals so we only received six entries. The barrier to entry was too high.”

While Monterosa’s business relies on audience interaction, McDonnell acknowleged that asking too much of an audience “can create anxiety”.

He added: “You need to pick your moment. We created an AR feature with Unity for the Kids Choice Awards for voters to collect virtual stickers of their favourite kids shows, but only at the point where they had already interacted with the voting process.”

Unity is also expanding into the content marketing space, according to the gaming engine’s head of global advertising sales Agatha Hood, now that more people (around one billion) have AR-enabled devices.

How ROI is measured with content marketing is still a contentious subject with Jamie Bolding, CEO of social first commerce business Jungle Creations, arguing that sales conversions are “not part of the evolution of social”. He added: “The main goal should be whether you have managed to have an impact on culture or on people’s opinions.”